In 2008, the UK committed to an ambitious goal of zero emissions in 2050. In 2019, the UK became the first major economy to sign carbon neutrality into law. But the Government's ambition seems to be all but ambitious when it comes to the transport sector.

Committing to green energy, more sustainable consumption and carbon friendly infrastructure is important, but the ambitious 2050 goal will be hard to hit if the British transport sector remains overlooked.

Transportation in the UK generates 23% of Britain's total carbon emissions, which is more than any other sector, according the Committee on Climate Change (CCC), the main governmental advisory group on climate issues.

Starting with tackling the transition from petrol and diesel cars, to electric vehicles seems like an obvious place to begin.

But there are still several political potholes that need to be paved by the Government, if it is to put Britain on the road to a carbon free future in 30 years.

The first speed bump is the price barrier. Electric cars remain more expensive than regular cars when measured on the base price of each vehicle, and they often come with extra cost of installing a charging point at home.

Despite the longterm savings from an electric vehicle, the majority of car-buyers are looking at the bottom line when visiting dealerships.

In the past, The Government used to ease the transition to EVs by introducing a grant towards the purchase of an electric car.

However, in November last year, the Department for Transport (DfT) reduced the grant on fully electric cars significantly, dropping it from £4500 to £3500.

Reports from the DfT suggests that this was done as the grants reached a “government cap”, and to provide more funding for public charge points. 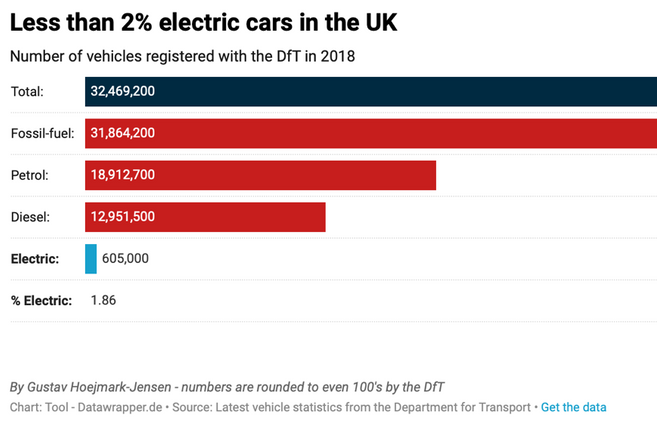 The higher price tag and diminishing grants towards purchase can be seen in the overall statistics.

The latest figures from the DfT show that there were almost 32,5 million registered cars in the UK in 2018.

This ties in with a CCC report from May 2019, that showed how only around 2% of all new cars sold in the UK in the 12 months to September 2018, were electric.

This is a long way from what Prime Minister Boris Johnson said in his inaugural speech on the July 25th, 2019:

“We will be the home of electric vehicles – cars, even planes, powered by British made battery technology being developed right here, right now.”

Safe to say that Britain is by all measures not yet a home of electric vehicles, despite the wide ranging both personal and societal benefits that come with EV ownership.

Compared to the UK’s Scandinavian neighbours, Britain fares poorly, to say the least.

In Sweden, electric cars accounted for 7.5% of all new cars sold.

So what could be wrong?

Is it perhaps missing incentives?

The CCC attributes the high percentages of sales in Scandinavia to the strong support by the national governments, who provide both tax-exemptions and other incentives such as low cost charging and widely available charging stations.

In Norway for example, electric and plug-in hybrids are exempt from all road, income and export tax, and they even enjoy free parking in cities and no road-toll.

Popularity is rising but incentives are needed

The popularity of electric cars in the UK is generally rising, according to figures from the Society of Motor Manufacturers and Traders (SMMT).

But as little as 0,5% of all miles driven in the UK were done in low-carbon vehicles in 2018 according to the CCC.

Estelle Symonds, the co-owner of EV Experts, an electric car dealership in Guildford, believes that the Government is providing the wrong and too few incentives.

“The Government should do a whole lot more to incentivise people to go electric. I think that electric cars should be exempt from all road tax. Already, electric vehicles are more expensive in the first place, and a number of electric vehicles are being taxed even higher now. People definitely distance themselves from cars in the high tax bracket.”

Representing the manufacturing and car trade industry, Mike Hawes, Chief Executive of SMMT agreed to an extend and said: “The industry shares the Government’s ambition for a zero-emission future but while manufacturers continue to invest billions in the technology that will get us there, they cannot determine the pace of uptake. We need a world-class package of measures, with heavy investment in infrastructure and long-term purchase incentives. This should include a fair and fiscally neutral tax system that encourages car buyers to choose the right low- or zero- emission vehicle for their driving needs.”

A low fuel tax is part of the problem

In the past, the UK Government influenced how much people would drive and which cars they would buy, through making adjustments to the tax on petrol and diesel.

A higher fuel tax meant less driving and the purchasing of more economic cars, whereas a low fuel tax is leading people to drive more and purchase less economical cars, that often tend to pollute more as well.

Since 2000, the fuel tax has been locked at 57,95p per litre, according to the Government’s website for taxes and duties.

One Boris Johnson announced before the election in 2019 that he would reduce the fuel tax by 2p per litre in the next budget.

A decision that would not only cost the Government £1bn a year, but also greatly reduce the incentive for people to buy low-carbon vehicles, according to the Institute for Fiscal Studies (IFS).

Further calculations by the IFS indicate that the UK Government has already lost out on “£19bn since 2000”, and it stands to lose another “£28bn if fuel duties are not raised in the next budget.”

“In recent years, revenue from fuel duties have been falling due to a prolonged freeze.

A rise in fuel duties would incentivise the move to lower emissions cars, and this may well be one of the tools that a future government could use to achieve lower emissions.” says Rebekah Stroud, a research economist at the IFS.

However, the fuel tax on one litre of gasoline in Norway is only around 42p according to the Norwegian Tax Authority, and yet popularity and sales of EVs far outweigh the numbers in the UK. So other incentives seem to more effective than just expensive fuel.

But regardless of whether it is higher fuel duties or grants and tax-exemptions that will make the difference in the uK, the importance of sustainable transport is central to the climate debate and whether or not the UK’s goal to reach zero emissions will be reached in the near future.