Shadow banking and its role in the modern economy 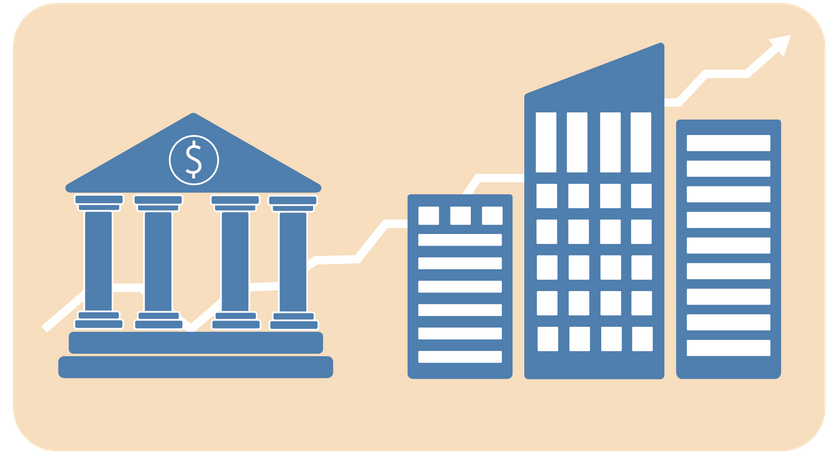 From being widely used by banks to offload debt, the shadow banking  sector has transformed itself into a highly specialised sector able to provide alternative funding. But experts argue that there is a lack of transparency and data, and yet shadow banking has taken centre stage in the EU’s effort to rejuvenate businesses. With a severe financial crisis looming in the wake of the coronavirus pandemic, both opportunities and problems may be mounting for the sector.

Few people had heard of the term ‘shadow banking’ before the bankruptcy of Lehman Brothers, a US investment bank with nearly $600 billion under management. The bankruptcy sent shockwaves through the world’s financial markets, and hundreds of highly leveraged banks and investment firms collapsed in the ensuing turmoil.

The subprime loan market in the US had imploded, and trillions of dollars’ worth of assets and collateral were rendered worthless. The housing bubble had burst, and despite government efforts and bailout packages paid for by the taxpayers, thousands of people lost their houses, their businesses and their livelihoods due to the financial crisis that followed.

Global financial markets took the worst tumble in decades as investor confidence disappeared overnight. Growth rates across the Western world were eviscerated and the EU quickly found itself immersed in a sovereign debt crisis that lasted for years.

The shadow banking sector however, thrived.

The financial crisis quickly translated into action from the newly formed authorities such as the Financial Stability Board (FSB), the European Securities and Markets Authority (ESMA) and the European Banking Authority (EBA).

Together with the Basel Committee on Banking Supervision (BCBS) the regulators imposed heavy restrictions on traditional banking activity, such as large-scale macroprudential frameworks that set new standards for banks, with higher capital requirements and stringent rules on acquiring funding and liquidity.

This new regulation made life particularly difficult for banks, but it meant that business was booming in the shadow banking sector.

According to Elias Bengtsson, Professor of Economics at Halmstad University and former principal economist at the European Central Bank (ECB), the heavy regulation imposed on traditional banks weakened their ability to raise funding and reach the new capital requirements.

In many ways, the financial crisis was the perfect storm for the shadow banking sector. “Traditional banks were in a shaky state, struggling to meet the new demands” says Prof. Bengtsson.

This meant that access to short-term liquidity to cover for the new requirements was in high demand, exactly the type of service that the shadow banking sector could provide. And so the shadow banking system quickly gained a “huge market share”, according to Prof. Bengtsson.

As new banking regulation came into effect in the US and in the EU, the growth rates spiked, averaging 9.2% between 2011-2014.

In comparison, the global GDP amounted to $85.9 trillion in 2018, meaning that the size of the monitored shadow banking system was more than double the economic output of every nation on earth, according to data from the World Bank.

But what mechanism enabled the shadow banking sector to grow so rapidly, at a time where most other financial sectors were still caught in the aftermath turmoil of the crisis?

A big part of the answer lies in the shadow banking system’s ability to securitise assets, a complex process that can perhaps best be explained using an illustration:

An illustration of securitisation

Following the arrows and numbers, the securitisation process starts with the transformation of, in this case, residential mortgages (1). The securitisation process begins with the bank pooling thousands of mortgages together (2) to create a residential mortgage backed security (RMBS) (3). The bank then off-loads the RMBS into a special purpose vehicle (SPV) (4). The SPV is often a bank subsidiary or a separate company, purpose-built to purchase the new RMBS from the bank. The SPV purchases the RMBS by issuing investment-grade bonds with different risk profiles and floats these to the capital market and investors (5). The SPV then channels the capital generated from the sale, back into the bank (6). In return, the investors get paid a premium, according to the risk profile of their bonds. Should the investors wish to sell their bond, they can freely float it to the market again (7), and the intermediation chain grows.

Providing this kind of short term funding for traditional banks was for many years after 2008 the raison d'êtrefor shadow banks. In fact, a similar method was used to off-loading risky elements from its balance sheets by the now collapsed US investment bank, Lehman Brothers.

Angela Wigger, Professor of International Political Economy at Radboud University, has done substantial research on the Lehman Brothers collapse and its use of special purpose vehicles (SPVs) in Europe. According to Prof. Wigger, Lehman Brothers were in full compliance with all the regulatory requirements at the time of its collapse.

But due to its highly specialised use of financial intermediation through SPVs in multiple countries, Lehman Brothers was successful in off-loading large amounts of risky debt claims from its balance sheets and into the shadow banking system without raising an eyebrow from regulators.

“This instance of shadow banking shows you how big banks initially invented and later used shadow banking from a desire to offload debt and turn it into liquidity”, Prof. Wigger says and explains that it is still “daily practice to this day in the shadow banking sector, Basel I, II, III [financial regulation implemented by the BCBS, ed.] or not”.

Lehman Brothers’ use of the shadow banking system illustrates the complex chain of financial intermediation employed by financial institutions to turn credit assets into leveraged capital, and according to Prof. Wigger, these chains have only gotten longer and more complex with time.

But despite increased complexity and a rather troubled past, the modern shadow banking sector is not to be dismissed, as it holds tremendous advantages for society and the wider economy.

The benefits of a shadow banking system

In fact, it turns out that the existence of a shadow banking system takes pressure off traditional banks, according to Prof. Bengtsson. As the presence of an alternative shadow system increases the potential separation of risk, making the wider economy less dependent on the well-being of the large banks.

Prof. Bengtsson emphasises that “healthy competition in the credit market” has been particularly welcomed by regulators and financial authorities after the rude awakening in the last financial crisis.

Paradoxically, the presence of a shadow banking system actually reduces the level of risk in the wider economy, as credit risk is not solely held by one, largely consolidated sector. “If a few banks run into trouble, they can pull each other down into disaster and they can pull big parts of the economy with them”, says Prof. Bengtsson, hinting at the key benefit of having a more diversified credit system with multiple actors.

With a more streamlined system, Prof. Bengtsson says that society in general stands to benefit from better allocation of capital and risk, and also lower transaction costs.

A more tangible example of how the shadow banking sector has been disrupting the capital and credit business could be peer-to-peer lending or direct lending activities. Lehman Brothers expert, Prof. Wigger, recently took out a residential mortgage using such a non-bank platform. “My pension fund was looking to invest money in trustworthy individuals with very low risk of default, so I got my mortgage financed through a non-bank intermediary”, she says and explains that she did not have the same trust for traditional banks, as she did for her pension fund.

With an alternative to traditional banks, individuals are no longer limited by standardised mortgage terms or the inclination of local bankers. And according to Prof. Wigger, the concept is becoming increasingly common in the EU.

For example, 19% of all mortgages are now being funded through shadow banks in the Netherlands, up from just 10% in 2015, according to IG&H, a Dutch financial consultancy firm.

But it is only recently that the shadow banking sector began focusing on regular consumers, according to Prof. Bengtsson. “In the past, shadow banking focused almost entirely on institutional or wholesale activities”, he says. However, with tighter control of traditional banks, it is natural that the sector looks for new intermediation markets, Prof. Bengtsson says.

The downward turn in the market and the low interest rate environment could cause private investors, pension funds and institutional entities to look more intently for alternative assets that will pay off.

According to Prof. Bengtsson, the traditional banks and bond market cannot provide this. “People will quickly move to other investments, and this could very well be to shadow banks to a large extent”, he says.

Where the shadow banking sector used to primarily service traditional banks, it is now constituted by different and highly specialised financial intermediators that engage in a range of financial activities, according to the FSB.

The shadow banking system, by the looks of it, seems ready to accommodate new capital and extend credit to the market where the traditional banks will not, showing the main advantage of its less conservative risk models.

In fact, some traditional banks in the EU are already employing negative interest rates on deposits, meaning that large scale deposits may cost the depositor money, rather than generate it. This again may direct investors’ attention to the shadow banking sector.

However, the pandemic has also caused a strong fiscal reaction that may work against the shadow system. Policy makers have agreed on trillion-dollar stimulus packages, central banks are ramping up their efforts to support the economy and macroprudential banking regulation is being relaxed.

As a result, the shadow banking system may be undercut by the traditional banking sector.

According to Mikael Olai Milhøj, senior analyst in Danske Bank, the largest bank in Denmark, the traditional banking sector is more than ready to meet any increase in credit demand. Milhøj highlights the central banks’ quick response, saying that this has positioned the traditional banking sector to better meet rising credit demands. “The central banks are doing everything they can to avert company bankruptcies, as this would only extend the crisis that we are currently facing”, he says.

Milhøj also explains that the ECB and many national central banks’ efforts to lower the capital requirements are temporarily freeing up capital that the traditional banks can then use to sustain the credit demand.

Recently, the BCBS pushed back the scheduled implementation of new banking regulation and the EBA has delayed planned stress tests for large banks. This leniency showed to the traditional banking sector could stand in the way of capital moving into the shadow banking sector.

But even though the traditional banking sector may be better equipped to extend credit and have sufficient liquidity to do so, there is still the danger of mass defaults and large losses on both private and corporate lending.

According to the IMF’s latest economic outlook report, the world is facing a financial crisis “much worse” than that in 2008. The shadow baking system could soon be more needed than ever.

However, a lack of transparency and incomparable data are some of the concerns standing in the way of what the shadow sector has to offer. Increased activity may well come with increased scrutiny, and that will be a challenge for financial authorities given the complex nature of the system.